Lenovo's X240 series of lightweight ThinkPads have long been some of the most lightweight, long-lasting business laptops on the market. The 12.5-inch ThinkPad X240 takes portable productivity to the next level with a powerful Intel 4th Generation Core Series processor, an improved design and an optional full-HD touch screen. Better still, with its extended battery, this $1,555 ($1,049 to start) Ultrabook lasts longer on a charge than any other laptop on the market, making it an ideal choice for users on the go.

The Lenovo ThinkPad X240 has the same simple-yet-elegant, black aesthetic as prior generations of ThinkPads. However, ThinkPad aficionados will notice some significant differences between this laptop and the X230, its 2012-era predecessor. The palm rest, which was uncomfortably shallow on all X200 series laptops dating back to 2008, has been lengthened, allowing more room for resting your hands while typing. On the other hand, Lenovo has replaced the attractive soft-touch lid on the X230 with one that has a plain, matte-black texture.

Like many other ThinkPads, including the 14-inch T440s, the X240 is made to take a licking. An internal roll cage, carbon-fiber lid and magnesium bottom help the laptop survive drops and dings, while a spill-resistant keyboard keeps the system safe from your drinks. The ThinkPad X240 is also MIL-SPEC tested to endure extreme temperatures, vibrations, dust and atmospheric pressure.

The 12.5-inch, 1366 x 768-pixel IPS touch display on the X240 delivers bright colors and wide viewing angles. When we watched a trailer for "The Avengers," the orange in some explosions and the red in Thor's cape really popped off the screen and did not fade, even at 180 degrees to either side. Unfortunately, the relatively low resolution made fine details (like the stubble on Robert Downey Jr.'s face) harder to make out than on the 1080p we tested. Gradients, such as the silver in the Avengers logo, appeared grainy. Lenovo will be offering a 1080p screen option on the X240 in the near future.

Registering 325 lux on our light meter, the display is well above the 213-lux category average and the 263-lux, but behind the 411-lux Dell Latitude E7240. The 10-point touch digitizer was extremely responsive throughout our testing, even allowing us to draw with all our fingers at once in Windows Paint.

Forget about using the X240 as a stereo. Though it was good enough for watching videos, the laptop's bottom-mounted speakers delivered weak, quiet audio in our tests. When we tried playing both the bass-heavy "Forget Me Nots" and the guitar-centric "Fight for Your Right to Party," sound was barely loud enough to fill a small room. The system comes with Dolby v4 audio software, which helps make the sound better than it would have been without it, but it still doesn't make the audio pleasant. Hitting 80 decibels on our sound meter, the X240 is well below the 84 dB category average when sitting on a table but sounded even lower when sitting on our lap.

With the ThinkPad X240 keyboard, Lenovo has taken two big steps forward, but also one small step back from its prior X200 series laptops. The palm rest, which left our wrists hanging over the lip on last year's X230, has been lengthened enough to support an adult hand, which is absolutely critical for typing comfortably and avoiding shoulder strain. The island-style keys are wide and large, and have a slightly concave shape that helps touch-typists feel the boundaries between them. As with other ThinkPads, the keyboard is spill-resistant and has a two-setting backlight that appeared dimmer than the keyboard on the T440s but was more than bright enough to make out all the keys in both low and high modes.

However, the keyboard also has a bit less vertical travel than last year's X230 and some other current ThinkPads. Though the key feel is still better than you'll find on 95 percent of laptops, the X240 just isn't as responsive as the ThinkPad T440s, or even the Dell Latitude 7740, which has more travel despite its thinner profile. We were able to achieve our typical rate of 86 words per minute on the Ten Thumbs Typing Tutor test, but with a higher-than-normal 2 percent error rate. In comparison, we achieved a much stronger 92 words per minute with a 1 percent error rate on the ThinkPad T440s.

Like other ThinkPads, the X240 has both a TrackPoint pointing stick and a buttonless touchpad. As always, we prefer the TrackPoint because it offers extremely precise navigation around the desktop without forcing touch typists to lift their hands off of the home row. Lenovo now builds the left, right and center TrackPoint buttons into the top of the touchpad on all ThinkPads, but on the X240, these buttons provide better feedback and require less force to click than on the T440s.

The 3.9 x 2.6-inch touchpad provided accurate navigation around the desktop, with no jumpiness or sticking. It also supports a variety of multitouch gestures, including pinch-to-zoom, three-finger swipe to browse between images in the gallery, and four-finger vertical swipe to minimize all programs or show a task list. We found that most of these gestures worked smoothly, but we had to be very deliberate to get the two-finger-rotate gesture to work.

The ThinkPad X240's 0.8-inch-thick frame leaves room for a number of ports you won't find on every other Ultrabook. On the right side, the X240 has an audio jack, a USB 3.0 port, a 4-in-1 card reader, a SIM card slot, a Kensington lock slot and an Ethernet port, the latter of which many ultraslim laptops (including the MacBook Air) lack. The left side houses another USB port, a DisplayPort out and a VGA port for connecting to older monitors and projectors.

The HD webcam captured reasonably sharp, bright images of our face under decent indoor lighting. However, when we took a shot in a dark area of our living room, the picture was extremely noisy.

The ThinkPad X240 stayed pleasantly cool throughout our testing. After streaming a video for 15 minutes, the touchpad measured a comfortable 81 degrees, the keyboard a pleasant 92 degrees and the bottom a reasonable 93 degrees. We consider temperatures below 95 degrees comfortable.

With its 1.6-GHz Core i5-4200U CPU, 8GB of RAM and 256GB SSD, our configuration of the Lenovo ThinkPad X240 offers performance that's good enough for even the most demanding productivity tasks and some light gaming. On PCMark7, a synthetic benchmark that measures overall performance, the X240 scored a solid 4,040 -- slightly above the 3,877 ultraportable-laptop category average, but a bit behind the 1.9-GHz Core i5-4300U-powered Dell Latitude E7240. The ThinkPad X240 is also available with the Core i5-4300U for $100 more than the 4200U.

The X240's 256GB SSD allowed it to boot Windows 8 Pro in a speedy 13 seconds -- quite a bit faster than the 20-second category average and a little faster than the Dell Latitude E7240 (17 seconds). The drive took just 36 seconds to complete the LAPTOP File Transfer test, which involves copying 4.97GB of mixed media files. That's a transfer rate of 141.4 MBps, which is well above the 104.9-MBps category average but a bit short of the Dell Latitude E7240's 164.2 MBps rate and the 242.4 MBps offered by the MacBook Air 13-inch.

The ThinkPad X240 completed the OpenOffice Spreadsheet Macro test -- in which we match 20,000 names up against their addresses -- in just 5 minutes and 22 seconds. That time is almost a minute faster than the category average (6:16) and 11 seconds quicker than the iPad Air 13-inch, but a tad slower than the Dell Latitude E7240 (4:45).

The X240's integrated Intel HD Graphics 4400 chip is good enough for viewing HD videos and playing some lightweight games. The laptop scored a solid 812 on 3DMark 11, slightly above the 752 category average and the 770 offered by the Latitude E7240.

The X240 managed a playable rate of 31 frames per second in "World of Warcraft" with autodetect settings, but that rate dropped to 17 fps when we turned the special effects up. Those numbers fall slightly below the 39 / 20 fps category average. The Dell Latitude E7420 notched 20 fps at its standard 1920 x 1080p resolution, which is higher than the X240 we tested.

Like the ThinkPad T440s, the X240 actually has two available batteries: a nonremovable 3-cell battery, and a rear removable battery. Because the laptop drains the removable battery first, you can pull out the rear battery and swap it without turning off the laptop. Lenovo calls this new feature Power Bridge.

If you're willing to deal with a little extra bulk, the ThinkPad X240's 6-cell battery will give you the longest endurance of any laptop on the market. With its 6-cell extended battery on board, the X240 lasted an impressive 20 hours and 28 minutes on the LAPTOP Battery Test, which involves continuous Web surfing over Wi-Fi at 40 percent brightness. That's the longest time we've ever seen on a laptop without a battery slice attached and only 18 minutes behind last year's ThinkPad X230 with its bulky battery slice, our all-time battery-life leader

If the added 0.4 pounds and the 0.3-inch bulge on the bottom of the laptop that the 6-cell battery requires are too much for you, you can opt for the 3-cell battery, with which the X240 lasted a solid 7 hours and 40 minutes on our test. Both times are well above the 6:19 ultraportable category average and the Dell Latitude E7240's time of 5 hours and 27 minutes. However, the 13-inch MacBook Air lasted 11 hours and 40 minutes.

Lenovo says it will be adding a full-HD screen option at some point in the near future. We highly recommend that you purchase the extended 6-cell battery, which costs just $5 more, and the 1920 x 1080p display when it is available.

Lenovo bundles the ThinkPad X240 with a handful of useful utilities. Lenovo QuickCast allows you to share files with other ThinkPads on the same wireless network. Lenovo Settings lets you configure the camera and power settings or turn the laptop into a mobile hotspot. Lenovo Companion contains shortcuts to a Getting Started guide and a showcase of recommended apps, along with a lot of promotions for services like Lenovo's trade-in program or a partnership with the NFL. Lenovo Support contains hints, tips and a discussion forum for users. 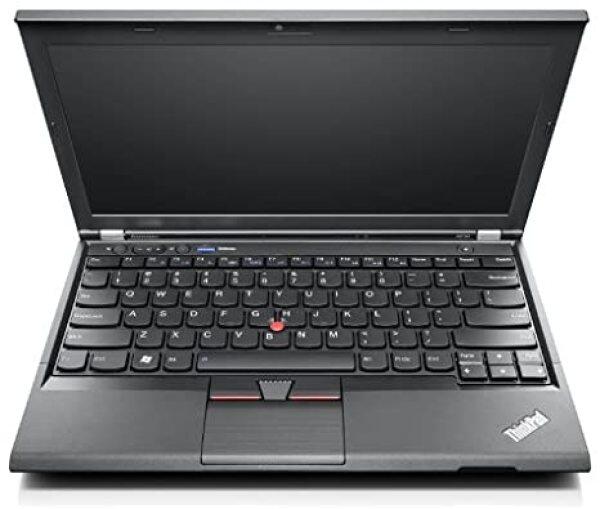 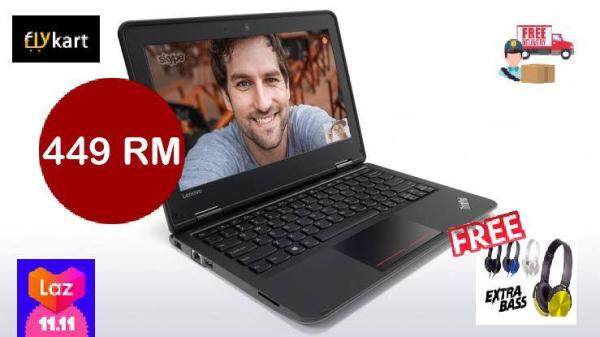 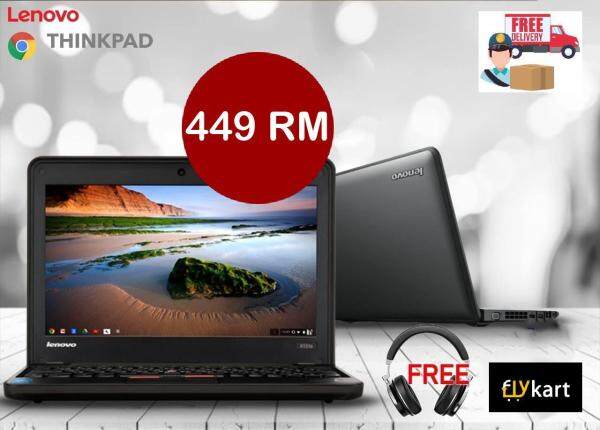 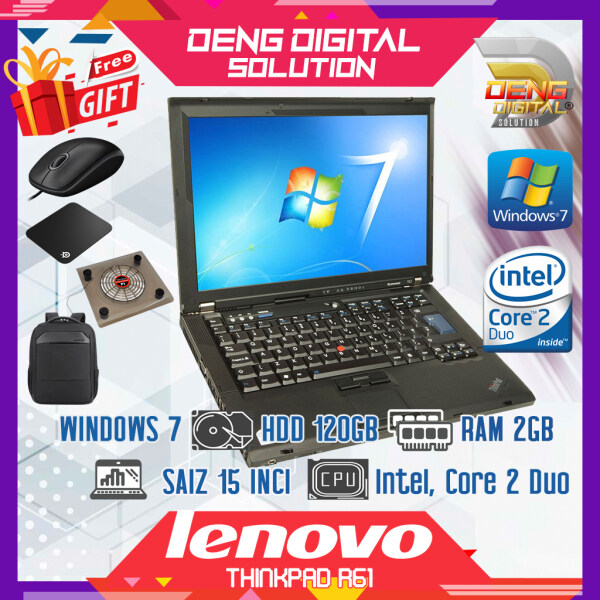 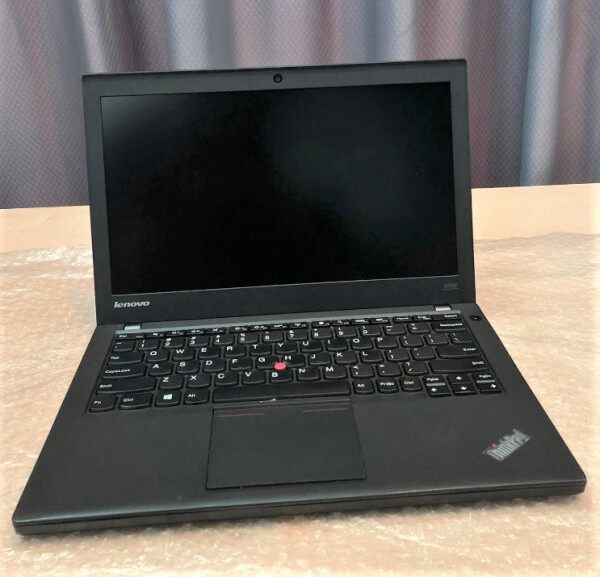 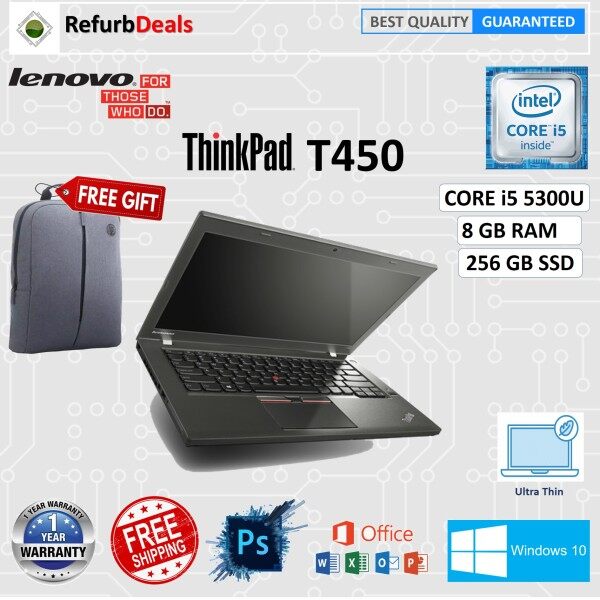